“Perlage has been a real boon. We can now offer top-end Champagnes by the glass instead of just by the bottle.” RON ZIMMERMAN, Owner, The Herbfarm, adjacent to Seattle 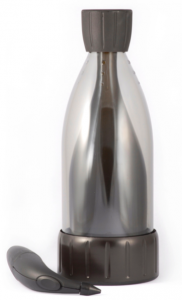 How Perlage Works: The Perlage System works by returning the headspace of the opened bottle to exactly the same composition and pressure of gases that existed before the bottle was opened. Properly used, sparkling wines preserved with Perlage will retain their original flavor and carbonation for weeks or months. Perlage has been field tested for years, and extensively tested by Dom Perignon. As a result, Dom Perignon commissioned a custom version of Perlage and sent it to over 2,000 of their best on-premise accounts worldwide.

Basic Kit: allows one wine By the Glass

Commercial Kit: allows 3 wine By the Glass at once